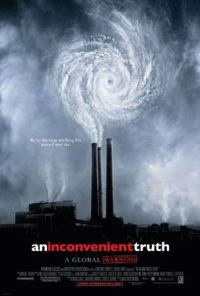 There is some mystical connection between television and human mind. Both can remain in each otherâ€™s company aloof of everything else. You will often find yourself watching something which you would scoff at in front of your friends. But on a very rare occasion, you might find something which you really like. A couple of days back, I was busy aimlessly changing channels, until I saw the documentary â€œAn Inconvenient Truthâ€ being broadcasted on HBO. For the late starters, â€œAn Inconvenient Truthâ€ is a documentary featuring former American Vice-President Al Gore which shows the dangers of increasing carbon dioxide emissions fueling global warming and its consequences. Now, it is fruitless to say how good the movie is. It won an Oscar for the best documentary and Al Gore won the Nobel Peace along with IPCC for his work on climate crisis.

One of the great problems that environmentalists face today is green fatigue. Now, people like me have been reading about global warming and ozone layer holes with beautiful multi-color diagrams since primary school. We were taught that our carbon footprint, which is basically the amount of net carbon dioxide that one puts in the environment, should be minimum. Use CFL bulbs (why not, the old incandescent ones donâ€™t help your power bill! ) Use public transport, good mileage cars etc. Most of us do, at least here in India. (Actually with crude oil going beyond $120 per barrel, we have to.) Whatâ€™s new about all this! And no matter what we do, it is not going to have any major difference, right.

No. Absolutely no. This is what Al Gore presents so magnificently in the documentary. His presentation of scientific concepts is simple, effective and gets the urgency of the issue across. The graphics and pictures are top-notch. Incomplete knowledge makes the climate issues look like rocket science. (By the way, why has rocket science become a popular metaphor for all things difficult!) Ever wondered how famines and droughts occur in adjacent areas, or why so many forest fires are occurring nowadays or what is troubling the innocent polar bears. You will find such issues and a lot more neatly explained in the movie.

But this is not a 3 hour science safari. It is interspersed with instances from Goreâ€™s own life. And, he is such a noble man. I canâ€™t imagine a politician talking so candidly about how his family used to have large tobacco plantations and how he now feels responsible for the spread of lung cancer â€“ something, which claimed his own elder sister. He also talks about how his life changed when his son had a close brush with death in 1988, when he lost the 2001 President elections to Bush (How could Gore have lost to Bush!), how he battled accusations that he was trying to take away American jobs in the name of climate change, how he tried to convince people city to city, individual to individualâ€¦â€¦. It makes the movie so rich and gripping that I didnâ€™t even change channels during commercials. I just kept thinking about all that I just saw. Moreover, you will find yourself laughing with some of his insights. The most important thing is Goreâ€™s approach towards the climate crisis. He is not saying guys, this and this is happening, so we are going to see a doomsday in the near future. He unequivocally says that we have a problem on our hands, and we need to realize its magnitude and take steps to correct it. You can gauge his positive attitude in the name of his group â€“ â€œWe can solve itâ€ which works for generating awareness and seeking support towards crucial environmental issues.

I am not going to rate this movie. I just feel that everyone who thinks of himself as a responsible and sensible human being should go watch it. This is better than 100 hours of lecturing on climate change. It is nice that you took out some time to read the review of this movie. Now, please watch it. Donâ€™t see yourself as a victim or witness of climate change. Consider yourself as a potent force in the mission to conserve Earth.