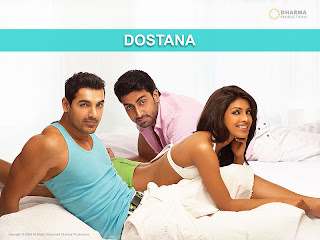 This post was written on Saturday but due to connection problems, I wasn’t able to publish it.

After the debacle called my Math Semester examination (more on it in the next post), I actually went out and saw a movie. Yeah, times have changed as Mom said “It looks like you are into an engineering college now. Going for the movie on Day 1 of your semesters.”

I have a strong dislike for movie analysts and experts. The basic criterion for the dislike is the fact that if you end up watching each and every movie that is made, how can you enjoy it!! And yeah, we do appreciate good plots and every other technicalities, but the point is that when you are in the theater, are you engrossed in the story or wondering about what this character or the plot could have shaped up? I had the plan of writing a review on Dostana and so when I was watching the movie, I was making some sort of mental notes on it. Its inescapable.

Ok. A hell lot of theory on movie reviews. Now lets move on to Dostana. The movie opens up with a Shilpa Shetty dance number. The song’s good. But, I have never been a big fan of hers. Though you have to say that she’s looking good. My friends were gasping from the first scene onwards. What is more attractive is John!! Man, his look wil put Troy’s Brad Pitt to shame. As the whole movie revolves around a gay love story, I can take the chance of calling him hot. John – a photographer and Abhishek – a nurse end up at Priyanka’s home looking for a room in Miami. (Thats a place to workThey end up making a gay love story because Priyanka’s masi won’t allow two baba log to live with baby. The story is very predictable. Both end up loving Priyanka and do their best to break her courtship with the boss at her fashion mag “Bobby Deol”. And as the movie ends, Priyanka goes to Bobby leaving John and Abhishek. Only in a movie!!

Now, Priyanka is looking deliriously hot, sexy, beautiful, put in the adjective of your choice. I am not competent to talk about acting in a forceful tone but, I will only say that she did great in all those happy moments. And thankfully, there weren’t that many sad moments in the movie to deal with. Priyanka, it felt good to see you back in your beautiful groove. (Haven’t watched Fashion till now, but friends say she’s better over here.

Abhishek surely looks the more authentic gay. His comic timing is impeccable. Although not the hunk like John, there is some mysterious sexiness inherent in him. His clothing, look, everything is great. He is in the character of the imperfect person, afraid of horror movies, slapped by his mother, ….. and does it well. John is first-of-all hot, but there’s nothing new for him in the movie. It was a kind-of-repeat of John in “Garam Masala”. But, yes he looks the part and is a very suitable cast for the role. Kirron Kher goes bonkers when she discovers that her son is uhoh gay. The song “Ma tera munda bigar gaya” is a comic mad. The whole theater went mad with laughter. Her dialogues like “Mere ko pata nahi ki tu meri bahu he ya damad ( I don’t know whether you are my son-in-law or my daughter-in-law) are comical epic stuff. Bobby as Priyanka’s boss looks as ordinary as he always does. We kept wondering why Karan didn’t use his Filmfare Most Powerful stuff and rope in some dude like Hrithik for the role. Basically, Bobby’s part is the movie’s not-so-glorious one.

Overall, its a must-watch movie, if you want to just have fun, There is no big story, but the movie does it. And yes, you won’t find a movie where two mainstream actors John & Abhishek are in a lip lock. It was aaaarghhhhhh. How could they? So much for reality depiction.

What, looking for a rating or what? This is no self important bloke talking. And I can’t rate a movie by watching it once.