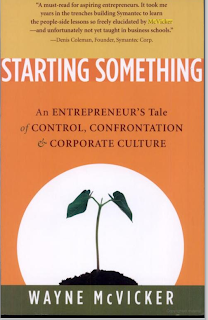 Browsing through the “World Trade” section of VIT library, I was looking for C.K.Prahalad’s famous “The Fortune at the Bottom of the Pyramid”. To my despair, someone had misplaced that book. Disappointed, I glanced over the adjacent Entrepreneurship section - a permanent favorite. I found “Starting Something” by Wayne McVicker– a strange name. I thought it will be a ‘how-to’ book on starting a company. It turned out to be a biography of the founder of a Silicon Valley ‘dotcom’ company – Neoforma.com I had read a lot about dotcom companies and their bust, so I picked it up to know something more about it.

As I started reading it, one thing instantly became clear. This book was not about Wayne McVicker; it was about Neoforma.com - a company that he had co-founded with his friend Jeff. The book showed how two people passionate about a business opportunity went on to make a company worth $ 3 billion in 4 years battling against the mightiest Venture Capital firm – Kliener Perkins. Starting Something has all characters – good, bad and nasty, but all of them come across as very real. It gives us an unflinching look into both the drak and bright sides of corporate culture – where dreams are fulfilled and the best of friendships are broken. Denis Coleman – founder of Symantec Corporation (the makers of the very popular Norton Antivirus sums up the book

A must read for aspiring entrepreneurs. It took me years in the trenches building Symantec to learn the people-side lessons so freely elucidated by McVicker - and unfortunately not yet taught in business schools.

– that is how deep the book goes in exploring the importance of people in the success of a business.

The book is divided into numerous small chapters of 4 to 5 pages generally. That gives fluidity to the story – the events register their presence, but it becomes clear that no single event can become the center-piece of the narrative.

Wayne McVicker and his friend Jekk Kleck weren’t the typical Silicon Valley entrepreneurs – both were in their late thirties with a family to care for. Like most other founder pairs, Wayne and Jeff weren’t the best of friends from the outset. But, both strongly believed in the concept of better flow of information to buyers – in this case hospitals. They wanted to provide all possible information about the large medical equipments as well as numerous small products that occupy hospital rooms. As their belief in the usability and importance of the idea grew with time, they ran into confrontation with their bosses at Varian – their present company. As Varian resisted, Jeff and Wayne proposed to carve out a spin-off from Varian. Though successful , they were taken aback to see the bickering and hateful corporate environment under which they left the company they had been working for years.

The book moves on to show how Neoforma discovered internet and realized the immense potential of the medium. As the company grew, Wayne explains his dilemma in hiring new people- which continues even as Neoforma transformed into a behemoth. He concludes that the single most important factor is the actual fit between the company and the employee.

Starting Something is not only about the business part of it. As Wayne and his wife Anni put every piece of their asset on mortgage for Neoforma with 2 young children to care for, Wayne describes the emotional tug-of-war he went through while eliminating their complete security putting their entire lives on the fate of Neoforma.

The book is also about people – from Jack (their warm attorney) to Wally and Shawn (their angel investors) To Alexander, JP and Bret (their VCs) Wayne explicitly highlights his ambivalence about venture capitalists – the people who care only about one single thing - making money and making it fast.

Throughout the book, Wayne never makes an attempt to cover-up his emotions. How he felt uncomfortable from being a founder to donning the role of an investor in the company that he had made himself. He also discusses his insecurity as Neoforma changes from CDROMs to a complex website - a technology he was unfamiliar with.

The book’s richness comes from the part where Wayne analyzes his own actions - why he pursued a particular deal, why he was adamant to hire a particular man to why he considered himself completely unsuitable in running Neoforma in the long run.

You will fell that the narrative becomes similar to a movie as the nook proceeds – not flashy in t he same way but with similar ulterior motives and huge drama at play.

After a successful IPO and a severe crash in share prices, Wayne realized that Neoforma had outgrown him. He moves on to found Attania – but not with the same intensity as Neoforma. That intensity is now for his family.

Overall a higly recommended read. You will love the truth and reality of the story.